Bicentennial of the Automation Nation

Robots and Revolution =Automation Nation for the Professional 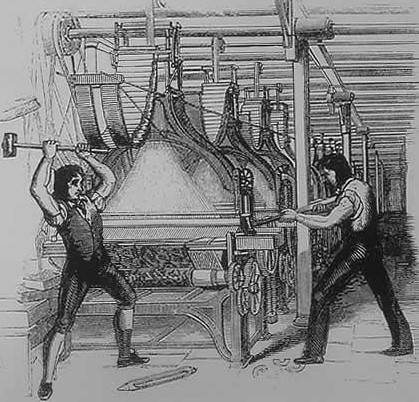 Ned Ludd was most likely a figment of someone’s imagination. He didn’t really exist, at least not in the capacity in which he is attributed. Ned Ludd, or General Ludd, as one of the fictitious aliases the personality went by, was the rallying point for a worker rebellion by a group called the Luddites. The 19th-century textile workers and weavers were highly wary of the then newly developed technology that automated much of their work. This happened in the early 1800’s primarily between 1811 and 1816, so very early in the industrial age. Typical of any new technology, the new machines threatened to replace them with less-skilled, low-wage laborers, leaving them without work. The Luddite movement culminated in a region-wide rebellion in Northwestern England that required a massive deployment of military force to suppress. This was such a big deal that the term Luddite lives on to this day to describe someone who is against technological change.

History is filled with lots rebellions and military suppressions.  What makes this particular one noteworthy –  at least for this blog, I’m sure all big historical things are all noteworthy to someone – is that we are still running into this issue for the professional individual contributor and we continue to deal with it again and again.. at a faster pace.

Danger Will Robinson, Danger!! The Robots are coming, the robots are coming!!  … oh wait, they are already here. It started years ago in the manufacturing sector. The automation came in and high wage high cost jobs left.. in droves. We can see this process happening again in China, mirroring what has happened here in America.

Again and again automation has proven that it doesn’t really take away jobs.. it increases productivity and then the people who did those lower productivity jobs go do something else. An economy is based upon economic flow.. currency.. ie. like the ocean current or movement. The challenge for the worker, the average worker, is that the change is very painful. There is a loss of a job at a high wage level because, really, what organization is going to invest heavily in automation if their labor costs are as low as legally possibe? It’s why fast food restaurants still don’t have (many) self service kiosks. They have to be retrained if they are able or at a point in their life where there is enough time, then they have to get employed, then work their way back up to a comparable wage level if it’s even available. Although there are programs – I work for one – to help people, realistically, it’s not a fully fleshed out option for most as life is pretty messy. There are logistical issues (that whole family and life thing), emotional issues (intense issues of loss), and capacity issues (how many people can really go back and easily learn algebra at 45 years old). That plus the time and true investment are prohibitive.

But this is low wage automation.. it won’t affect the highly educated professional individual contributor, right?  If you were watching Family Feud right now I’d make that obnoxious buzz noise and show three X’s on the screen.

Ok, lets look at a highly educated scenario. Here is a case study. How often do you go to your local pharmacy and get a comprehensive evaluation by your pharmacist? How often does he or she use their expert knowledge to discuss with you the different options, the various effects and possible side effects of the different drugs? Or are they now a highly paid clerk who mostly works on recommending the best value over the counter gas medication and spends the rest of their time sitting at a computer and oversees assistants counting pills?

Hey, that’s the bottom line pharmacist. I mean, what kind of pharmacist works at the Walmart pharmacy? Really, to see an advanced Pharm D in action we need to go to a hospital and watch them there. Except (I say turning around in a slow Columbo motion) how many pharmacists sit and consult with your physician? How many of them come in and discuss the different drug combinations you can use to achieve the aims of your care plan? Now, how many of you have seen the pharmacy robot buzz through? I’ll bet more of the people reading this have seen the latter vs. experiencing the former. Right now the only thing keeping pharmacist salaries in the high end of the wage scale is the educational and legal requirements limiting the supply and keeping the demand artificially high. That won’t last forever, but at the glacial pace of change, at least here in the U.S., most working pharmacists may be safe, but I can definitely imagine a day when instead of having one pharmacist per store, you have one covering five stores with a telepresence system.

One of the great challenges of the industrial age was the underlying drive to greater and greater productivity spurred by lots of factors, not the least of which is technological innovation. We have now truly moved into the early stage of the information age. We are seeing a perfect storm of sorts for the professional individual contributor. Technical innovation combined with advanced and automated information processing ultimately means everyone’s job as professionals (accountants, pharmacists, engineers) is now at greater risk than ever before and just like in the time of the Luddites there is fear about this modification to the structure of our world. The difference is that that professionals are now the ones who are going to suffer the most as the pace of change accelerates.

There really are different ways I can conclude this post. I can add more information and a fatalistic proclamation about how the business world is going to change.. and you better beware of it because it will cause much hardship including greater demands on your life. I can be optimistic and say, with every change like this, there is great opportunity for those who are aware and prepare for the needs of the future. If the robots are coming to replace professionals then learn how to sell, service, program – or if your really wanting to be the top – design robotics. I can say there is a third way; just give up, live hyper-frugally at some government job, and hopefully you’ll be able to maintain some standard quality of life. I can say that’s the present and lets look at the future instead.. and then  pontificate on what comes next because the pace of change means it certainly won’t be another 200 years until the next great change in society. I have no idea what is going to come after the information age. There is talk that the age of biotech or maybe bio-age is next… (hey, maybe the pharmacist at Walmart is smarter than all of us as they will be the lead in the next change).

But really what I want to say is that we are professionals. No matter with what angle we look at the situation we will figure it out, we just need to do it with as little upheaval to our lives as possible.   Because change can be very stressful… you know, like that buzz you hear when you get the final answer wrong on a popular game show.