NextEpisode 182 – Spending Like A Sailor On Leave
Observations & Ideas

Looking Forward – What is my Legacy? What is your legacy?

What is your legacy going to be? 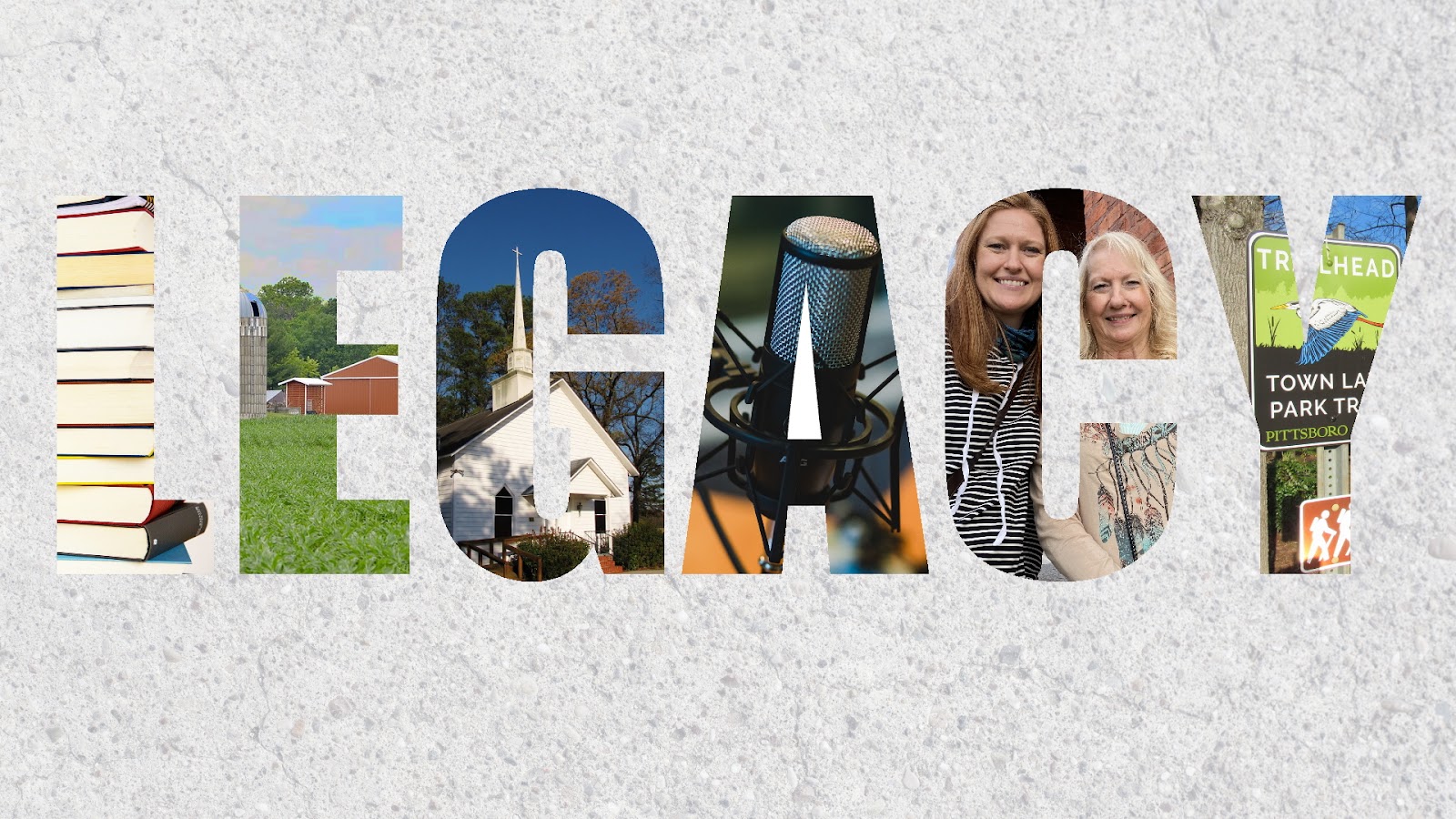 I have been remembering my grandparents more and more as I get older.  My grandmother was mostly a stay-at-home mom from what I understood.  She did have a part-time retail job at Jordan Marsh department store when she was in her retirement years but I think that was just to get out of the house and away from a retired grandpa who was now always home.   This description completely undersells her outsized personality.  She was the great conductor for family machinations. Her personality was unique.  My grandfather was a tradesman. In the years that I knew him he was in his retirement job where he crafted custom wood  signs for the town of Davie.  Prior to that he was an aircraft mechanic, and prior to that he works in my grandfather’s cheese shop in New York.  His painting, metal etch craft s, and woodworking was all good enough where he could sell it at local craft Fairs.  Many years after their passing these memories are all that’s really left of them. In my grandfather’s case there’s some paintings but they don’t tell the story of his life. With my grandmother there’s just some photographs.  There is no question that some of their personality traits have come down through me.  As an example, when upset I also catch myself using Grandpa’s catchphrase “Dammit to Hell,Ninfa!”. Technically He didn’t always append my grandmother’s name to it, but since I always saw them together in their later years while visiting their house grandpa was usually upset about something that Grandma did. Hence, why grandma’s name was always included in Grandpa’s mild curse. Unfortunately that’s it. That’s all that remains of their legacy.  There’s little bits and pieces.  There’s some photos and I think a video or two. Maybe there are some newspaper clippings in a scrapbook somewhere.  Unfortunately, there’s nothing that really tells the story of their history, their impact on the family or on the world around them.   There is even less with prior generations like my great-grandparents, who had an even more engaging rags to riches story as they were the generation that came over from Italy with nothing and created a thriving family business which ultimately allowed for my parents adventures at Keuka lake.

Part of the reason why there’s a limited record has everything to do with the ease of recording media. In my grandparents day they had photographs, some real to real tape and silent film strips. There was none of that in my great grandparents’ day, well there was some limited film based photographs. I know from my own experience with the podcast and with digital photography today, The ratio of what you record versus what you can use or what is good enough to keep, is probably 10 to 1.  Today we can take tens of thousands of photos and videos on our phone and have hundreds of good ones. Back in the day they could take maybe a hundred photos and film recordings over the course of the summer before it got prohibitively expensive to develop. Maybe 10 were good out of that. On the film side there was no editing. They’re all just grainy black and white films of people waving at the camera or panorama shots.  None of this comes close to being able to communicate the personality and stories of the people who are in them.

Legacy is interesting, it’s what you leave behind.  I think that’s why you always hear the term used with presidents and captains of industry.  They are the leaders of massive organizations and making decisions that affect millions.  They understand their time is limited. They want to have an impact beyond the time that they are actually in power and making decisions.  Hence, legacy. For them it is the ongoing impact of who they were and what they did.

Everybody has one, some are overt, some are very subtle, but it exists. In the case of my grandparents I don’t just use my grandfather’s catchphrase, I share some of the values they instilled in me. Values, that my kids will adopt  from me and that will be shared with their kids.  The legacy lives on, not just in my branch of the family tree, but I’m sure in others that I’m no longer close to.

Your legacy isn’t nearly as impactful if you don’t look at it through the lens of history or at least the proper historical context.  For example, going back to the Keuka lake thing. The lake community today has been converted to a massive short-term vacation destination with high taxes and even higher cottage rentals.  Owning a cottage or a series of cottages today is very different than what my great grandparents did for my grandparents’ generation.  Also the dynamic of the world was very different. Wives were expected to stay at home, manage domestic affairs and raise children.  Taking that great success and trying to replicate it really means understanding it at a deep level. You have to look at the outcomes and work your way back. What I would do today is very different than what my great-grandparents did.  I think that’s the mystique of the past. Why it takes on a life of its own. We look at the past and the legacy of our forbearers and we try to understand their life within the context of our modern reality.  It’s easy to do this as we don’t have the details of the past.  Going back to the lake house example, I have no idea what those cottages cost relative to my great-grandfather’s income.

When I look at my legacy, ironically it’s this little side hustle I did on a whim that I think we’ll have the greatest impact years into the future.  As I’ve written more and more, I’m thinking in the back of my head, how will this read in 50 years or 150 or longer? How will it bring value to people’s lives far in the future?   It’s not just a blog about the collision points between work and life, it’s also part of my legacy, one that will definitely transcend me if I take care with it.  I had no concept of this when I first started writing. It was just a way to try something new.

Looking around I think most people are so busy trying to survive the never ending challenges of life that there is very little in the way of this long-term thinking.  This is probably why presidents and the biggest of our business leaders consider their legacy often. Their job is to think about decisions that will have impact decades and centuries in the future.  For the rest of us, our job is to get a paycheck at the end of the week.

I think there’s real value in this concept of legacy.  It’s not just about the far future, it really does have an impact on what you do today.  Long-term thinking, not just with things like retirement, can have a hugely positive impact on your life.  We’ve all heard phrases like “you can’t take it with you.” But it goes so much deeper than that.  If you ask yourself, “When my story is told, what do I want people to say about me?”, it may really force you to reexamine every aspect of your life. It may even motivate you to make the huge changes that you’ve dreamed of, but may be never have had the fortitude to implement because change is very hard.

For me, when I consider my own legacy, I think my values need to transcend my current reality.  If I can have an impact in some small way of encouraging people to minimize risk transference in their life, to be wary of promises from the corporate infrastructure, and to encourage people to think about the world around them more I will be happy with that.  I really hope that through this writing people will look at my reality in this time, and be able to relate to it within the context of their own reality in the time that they live.  If they can relate to it, then they can probably benefit from the stories and make adjustments which will make their own lives better. I think that’s a reasonable legacy for an average guy.

I wrote about this today because my legacy has been on my mind.   If it’s on my mind, and I think it’s valuable to think about it, I can hopefully bring some of that value to my readers as well. If you haven’t considered the concept of legacy, the concept of what you leave behind after you’re gone, maybe it’s time to do so now. I keep thinking this is something that is a natural thought process as we get older, but I also think about how it could empower us if we thought about it when we were younger. I think it would really change the trajectory of many people’s lives.That being said when you’re younger you typically don’t have that much and you do get stuck in that mindset where  all you think about is getting the next bill paid, or getting kids to school the next day.

Who knows, if my blog becomes super popular or if some of my other media endeavors blow up, maybe the catchphrase “Damn it to hell, Ninfa!” will become part of popular culture in the way it has for our family.  That may not be the best  legacy to leave behind for future generations, but it would definitely be a funny one.  You know, If all I did was make future generations smile, I think I’d be happy with that as my legacy.