Part I of a three part story about the usefulness of a PhD. 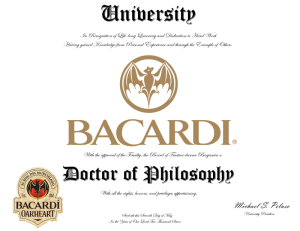 Part I: Back Story

I’ve recently written about the dangers of selling someone else’s product.  I know these dangers first hand because I used to be in the travel business.  First a little back story:

I talk about seasons of life.  There was a season of my life that I’ll always think fondly of, it was before my wife and I had kids.  *cue sigh here* I was still very focused on achieving the brass ring, the big win.

I had realized at this point that it wasn’t going to come from climbing the ladder in Corporate America.    So I decided to go into business for myself.   FYI, i’m not jaded on this concept, this very blog is another stab at going into business for myself.  I had considered several options.. slumlord (not kidding), used car dealer, and a few others.   Remember at the time I wasn’t married and I hadn’t had anyone as a role model who can teach me how to be in business for myself successfully.  A huge chunk of being in business for yourself is capitalization and I was absolutely not in any sort of position where I could financially support the thousand, tens of thousand, or hundreds of thousands of dollars it would take to get started into business.  I definitely dodged a few life bullets because of that.

I was dating my wife at the time and was looking for an inexpensive vacation where we could get away.  I don’t know why I was looking at cruises  but I had looked online and was enticed by the prospect of traveling on the world’s largest cruise ship (at the time.)  I found an amazing deal online, which turned out to be a total screwup on the part of Amazon.com. – It was still early days in online retailing.   I was fortunate enough and computer savy enough to print out some screenshots of the deal.  I think it was something like $150 a person for the week.    Amazon of course didn’t give me the deal when I tried to book it so I brought my case right to Royal Caribbean figuring there was a chance they would honor the deal.  I would think that they would usually just brush me off, but since I emailed in my screenshots the rep knew I was sincere in just trying to get a deal.  After several conversations and negotiations and Michele and I got a week on Voyager of the seas for under $1000.  (We spent over $1500 on board but i’m sure I’ll write more on that later).  I was so impressed with the experience I thought I could sell that product.  Who couldn’t sell a luxury vacation, I was also amazingly impressed with the fact that Royal Caribbean always tried to push me to a travel agent rather than book direct through them.  I felt that this is an industry that really supports their channel.  Enter North Carolina’s newest and best travel agency with a specialty on cruise lines and all inclusive vacations: Piedmont Cruises.

Fast Forward several years and I exited the travel business older and much wiser.  I still like the industry products and I see the cruise ships to the world’s largest gadgets, something I have a strong affinity for but I have no illusions about getting wealthy as an individual travel agent.  It is this familiarity for the industry that has me keeping a single toe in the water of travel.  An opportunity crossed my desk related to the industry that I decided to take advantage of.. and that’s when I met the person who taught me how to get a $30,000 PhD in Bacardi.